Revenant lay asleep among a bed of kibble in a repurposed mixing bowl, his eyes fluttering open now and then long enough for him to reach out and nab another morsel with his tongue. Crumbs of sourdough and a few splotches of mayonnaise on a decorative gold-trimmed plate were all that was left of Ethan’s tuna sandwich. The ache left his wrists as his fingers flew across the keyboard. As far as his limited resources could reach, The Sable family as a whole was untouchable, but Julia was uniquely vulnerable. Maybe she did die, maybe she didn’t. As long as she was still in the woods, though, he would hold her accountable.

Ethan had rolled in bed for hours fretting about the moral ramifications of this, but sitting static thinking about people his actions might hurt left him with the conclusion that the best thing for him to do in the face of all this injustice was just to sit and literally rot. History is littered with people who did terrible things for noble reasons, but what about the people who fail to do important things because they don’t have the stomach for the ugliness? All that evil requires to win is for good men to do nothing. Somebody said that, right?

Ethan’s research had put him in touch with several local groups dedicated to keeping zombies under control. It was simple enough to post on their forums about a group of zombies with pretensions of being human, less easy to get more than likes and generic comments. The irony wasn’t lost on him, and he selected a screenname befitting.

MrNormalHuman: Some rotters are pretending to be good homo-sapiens. Building barns and singing in the woods.

CleanAwayTheRot: Those fuckers! Let’s get ‘em!

MrNormalHuman: We should get a raiding party together to take them out!

Even angry gun-toting roughnecks seemed more inclined to talk about attacking zombies than to actually do anything. Ethan would have to really get them going.

MrNormalHuman: Zombies built their own church where they blaspheme the name of God.

BlowTheirHeadsUp: Disgusting! Someone should burn that devil church to the ground!

Ethan scratched his head. Maybe he was still underselling. Stacy tried to explain writing to him once. Paint a picture with your words.

MrNormalHuman: Picture the lush forest. Singing birds, a deer lopes away. Now you hear the voices of groaning zombies. They shamble around a campfire, roasting one of your fellow humans! The savages! Their heads roll back on their necks as they pretend to pray to God! With each step, they mock and defile everything it means to be a human being! This is happening right now in a local forest! We can’t let this affront go unanswered!

Ethan lifted Revenant from his food bed and laid down on his own bed, holding him close to his chest. Revenant reached up and licked his chin with a tiny kibble-smelling tongue. Actually his whole body smelled like kibble. What does it take to goad a raiding party?

MrNormalHuman: Zombies killed my sister. She was seven years old and they caved her head in. They ripped her belly open and excised her entrails. They feasted on her eyeballs and ate her little legs like turkey legs at the state fair.

SirDavid: So, you just stood there and watched them do all this?

Ethan scowled. He was smarter than some crowd of second amendment fanatics. How dare they not bend to his will? Revenant snored especially loudly until Ethan plucked a piece of kibble out of his nostril. He checked the time. Maybe he should go to bed.

The next morning, Ethan awoke to a tap on the door. His father carried a silver tray with thick slices of french toast, hashbrowns, and eggs benedict and smiled apologetically. “We’re trying to find you a good hotel with no connection to the Sables. Just try to take care of yourself as best you can in there in the meantime, ok?”

Ethan nodded and Dad left the tray on his bed and cleared out the tuna sandwich plate. As he breakfasted, Ethan felt his creativity returning. Guns had got him thinking. 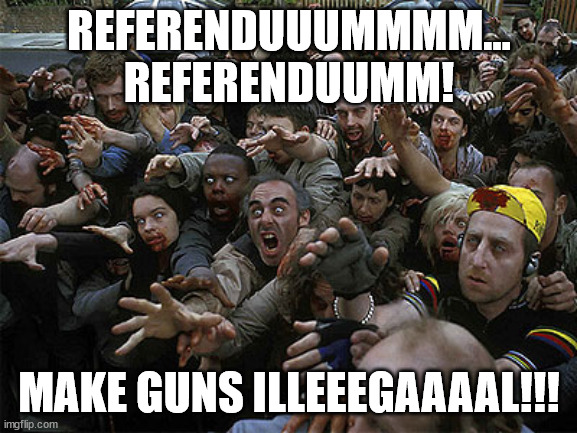 Did you know that zombies can vote? If they’re clever enough to make it to the ballot box, they still are technically allowed to use it. It turns out some zombies in neighboring Forsythe County are going door to door collecting signatures to put a measure on the ballot to take away our right to carry firearms! We have to stop them!

+1_against_undead: As soon as we find out where these socialist zombie scum are, let’s have a raiding party tomorrow.

Ethan grinned. Let them stew a bit before he told them where. It occurred to him that the zombies they’d be fighting had guns of their own. This might be less of a rout and more of a bloodbath. He didn’t particularly like either side, so so much the better. Ethan remembered the phone he’d turned off on his way to Forsythe Summit Park. Was he still hiding? He couldn’t remember. Whatever. He turned it on again.

Stacy Torres: Ethan, can you and your family help me get into Sable Engineering’s Building Z? I know you’ve got connections. I’ve been researching the hell out of this, and I think if I could just go through the old documents they keep in the basement, I might be able to find the proof we need.

Ethan stared at his phone for a moment. Revenant scratched at the window, and Ethan opened it and held him out. He imagined the stream cascading down from his third-floor perch and hitting Keith Sable in the face. The fresh air cleared his mind, and he liked the idea of being a part of the solution without causing a bloodbath. When Revenant was finished, he turned back to the DoubleTap forum.

holy_smite: We have to know where they are, dude.

He pulled up his phone again.

Ethan Stowe: Kramer, my friend Stacy has a plan and she needs to get into the basement of Building Z on Sable Engineering campus. Would you have any resources to help with that?

Do you want to read more? Subscribe at the bottom of the page!

Can’t get enough Munk Fiction? Sign up for the newsletter!

Science fiction and Fantasy author with a focus on philosophical inquiry and character-driven drama.

View all of Sam Munk's posts.